Things I hate about… Going to the Gym 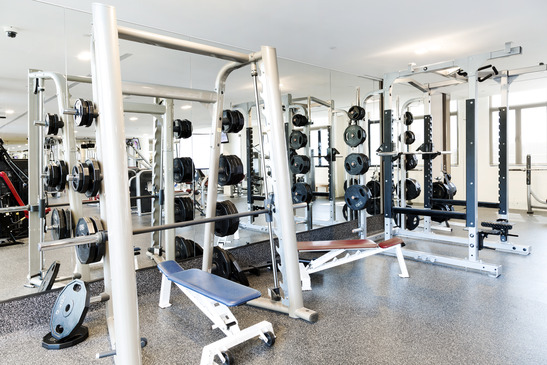 Let’s face it, for all of the wonderful reasons to go to the gym, there’s a bevy of reasons we loathe this practice. Before we can think about the benefits of losing the extra pounds we’re carrying around, the delicious feeling we have after we’ve spent an hour or so working out and getting our body energized, or the luxurious feeling of a hot tub after a long workout session, we’re faced with all the things we hate about getting up off our no doubt copious duffs and getting to the gym.

And then there is the getting up early, having to shower at least twice a day, feeling pains in places you didn’t even know you had, worst of all, feeling like you’re not making any progress as the scale stubbornly stays at “No luck today fatty!”  While we all hate these experiences, the good news is, they’ll pass (well, except the sweating), and there are ways to avoid some of them entirely.

Since this is an experience shared by all those who have to force ourselves to what becomes our favorite place to be, let’s have ourselves a little hate-fest, and get it out of our systems, shall we?

A lot of the things you’re experiencing as part of working out are merely your body getting used to being active. Some of them seem to drag on forever, but as you make working out part of your daily routine, you’ll find that what used to be torture becomes pleasure. I’m going to relate some of my personal experiences in here, because I was probably the whiniest least enthusiastic exercise enthusiast you’d have ever met.

If I want to work out, I have to get up early

This isn’t necessarily true, but it’s certainly true for a lot of people. The idea of hitting the gym after work is just madness for a lot of people. You just spent 8 hours watching the clock waiting to get out of this terrible place and get home, you’re really not interested in an hour or two long stint at the gym. So while there’s no reason you can’t go to the gym after work, most people get up and out beforehand.

When I first started I was enthusiastic to get out of the house and down to the gym. It was fun, exciting, and I felt good about finally doing something to improve my health. This lasted all of a week, after that I was having to convince myself to get out the door.

I managed to do it though, and after my second week I found myself waking up bright eyed and eager to get out the door. I’d gotten used to it, and my body was starting to crave it. The worst part of this? You get to the point where rather than a relief, missing a day starts to feel like a let-down.

The Sweating, oh the sweating!

Let’s be honest, it’s rare that anyone starts going to the gym because they feel energetic and in shape and want to stay that way. Usually one joins the gym because working at home lacks the feeling of commitment paying for that gym membership does.

If you are working out at home, good on you, I could never make that work, and I tried! Since you aren’t in shape, two things are bound to happen. First, you’re going to sweat at the first hint of any serious exertion.

Your body isn’t used to it, and it’s trying to stay as cool as it can. This will never really stop, and if it does you need to start downing more water. Sweating is the body’s natural cooling system, and if you aren’t sweating, you’re likely dehydrated, and definitely on your way to overheating.

Will it stop? No. However, you will notice that during your first week or so of serious exertion, you’ll be smelling like the inside of a fast food restaurants grease bin. Your body is going to start pumping out the kinds of toxins you didn’t even know you were holding on to, and it’s going to smell BAD.

Once you’ve been going for a couple weeks, you’re going to start noticing something strange (possibly faster if you’re changing your diet too), often your sweat will begin to take on a fresh healthy scent, and while you’re still going to want to shower, you’re not going to need nose-plugs to get through your workout.

My weight isn’t going down!

Haven’t we all been here? You start working out, you’re proud of yourself. You’ve made it through a solid week, you have been watching what you eat, and when all is said and done, you know that you’ve been burning enough to keep yourself losing weight! So why isn’t the scale moving? Every day you get on it, and it doesn’t budge an inch.

When you hit this stage, it’s not uncommon to get frustrated and depressed. Sometimes you’ll drop 5 or 10 pounds the first week or two, and then hit a point where you’re not losing anymore. If anything, this is even more of a letdown.

Before you get yourself too frustrated over this, you need to take some time to seriously consider what’s going on with your body. The first two weeks you’re often dropping off water-weight and maybe shedding an actual pound or two. If you’ve been eating responsibly, there’s some adjustments your body is going through there as well.

The most important thing missed by those new to exercise is that you may still be losing FAT, which is what you’re really after, right? What you’re gaining instead is muscle. If you want a real indication of where you’re at progress wise? Take along a measuring tape, and take your measurements weekly, this is a far better indicator of your progress than mere weight loss.

These are just a few of the things that we hate about starting a new exercise regimen, and it’s something we all go through. Don’t let these things keep you down, the longer you keep exercising, the better off you’re going to be in the long run. You’ll notice an overall improvement in health and well-being, your weight may not change but your shape certainly will, and that tiredness you’ve been living with every day will pass as your body gets used to being active.

Exercising is a sure fire way not just to extend your life, but also to improve the quality of those extra years you’re buying yourself. Life’s too short to be tired, sick, and depressed all the time! Exercise can serve as an amazing cure for all three of those!

The Glare of the Fit Elite

It’s a strange thing isn’t it? If you’re out of shape, you can put money down that any time you’re seen enjoying your favorite vice, people are going to give you the evil eye. Got a few extra pounds and you’re enjoying a McDonald’s Quarter Pounder? You can almost HEAR the whispers of “hey fatty! Get to the gym!” Been to the local swimming hole lately? No matter how concealing your outfit, if you’ve got a few extra pounds on, you can feel the accusing glares of the presumed beautiful people, decrying your imperfection and silently wondering why you aren’t at the gym.

But get to the gym, and are we free? Do we see the praise of those who would, elsewhere, be telling us to get here? Of course not! The Fitness elite seem, if anything, even more put out that we’re here! How dare we defile their holy temple of fitness, this is where the beautiful people go to stay beautiful, such is not the place for you! Don’t let these looks get in your way, just power through until you can punch them in their snide little faces with a 50 pound barbell.

All the Isolation of working out at home

While the technological advances have had as many beneficial effects on the workout experience as they have on anything else, their impact on the gym experience has been mixed. There was a time when going to the gym was a social experience, where those intrepid fitness minded people would interact with the others going to the gym. It was an air of open support and socializing, which has been impacted by those seeking isolation in their workout. Instead of being an atmosphere of mutual toil, the gym has become a place of quiet isolation as each dives into their electronic devices during their workout. With their heads in their music lists, podcasts, and movie broadcasts, no one really socializes at the gym anymore. So while once we went to the gym to get into a group of likeminded people, now we are treated to all the isolation of working out at home.

The unofficial rating game of the showers

Probably one of the most difficult thing for the body conscious individual seeking to improve their form, the showers are perhaps one of the most trying parts of the entire gym experience. They find themselves surrounded by those who have been coming to the gym to maintain their perfect figures and six-pack abs. One can’t help but feel judged as they attempt to prepare to hit the gym, and worse, the trudging back in shame from a regrettably short workout before those who came in before they did.

It’s hard enough facing the judgment of people every day on the streets as we find ourselves falling short of the impossible guidelines set by the media, but going in to where we strive to reach those seemingly impossible heights only to find ourselves facing that same scrutiny can be incredibly disheartening. It’s a challenge to overcome our initial shame at our appearance among those who flaunt their perfectly sculpted forms in the gym, but we know that in the end we hope to be one of them, with perhaps just a touch less judgmental arrogance.

In contrast to the isolation mentioned above, sometimes we find ourselves facing something almost more vexing. The quiet condescension we face in the showers is bad enough, but then there are those incredibly helpful individuals who feel it necessary to point out our flaws as we’re working our way through what is already a trying workout. “You should really work on your delts” or “Your gluts could use some work” are among those phrases that make you just want to pummel someone with a barbell.

These are just some of the things those trying to get into the realm of fitness grow to loathe in their experience at the gym, but there is definitely something to be said for seeing your way past it and getting on in there anyway. After all, the whole point of going to the gym is to improve our health and look good in next summer’s swimsuit at the beach! So lift your head up, get out of the house, and on your way to the gym!

Recommended Articles For You From Our Site:
How To Safely and Correctly Do Two Arm Dumbbell Triceps Extensions Top 4 Supplements For Bulking Fast!